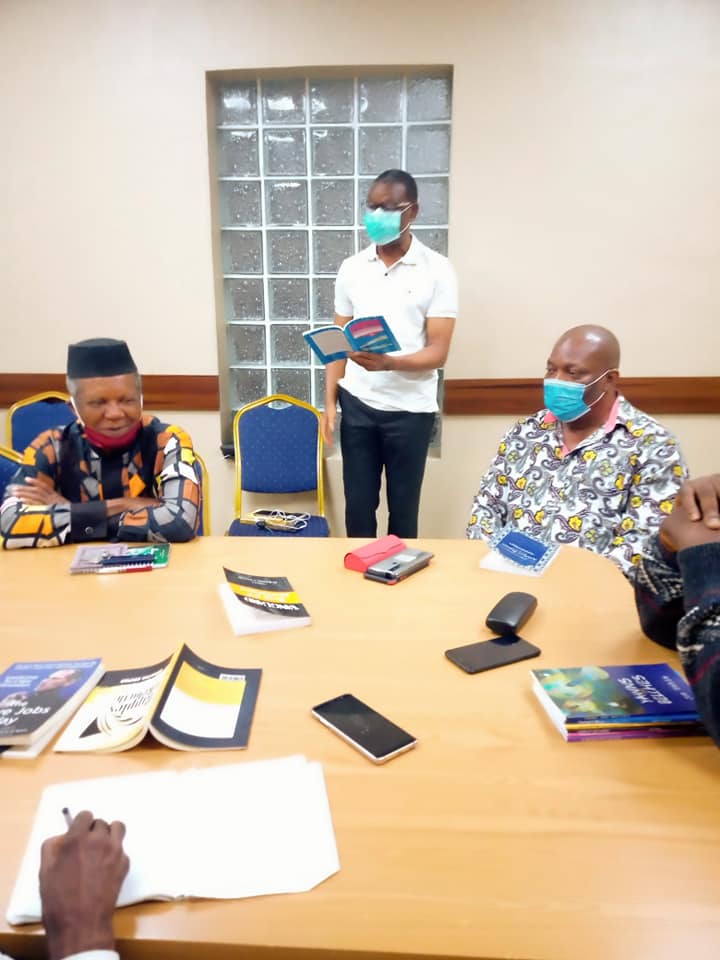 …As speakers hail Club patron.
…’Writers must live for a cause’ – Ekong Sampson

It was an evening of epitaphs, eulogies and poetic laying of wreaths as members of the Uyo Book Club, a fast growing community of intellectuals exhumed the ghost of the revolutionary poet, Christopher Okigbo and sat him for discussions at the July roundtable reading session of the club held last Saturday at the Shakespeare Room of Watbridge Hotel&Suites, Uyo.

Christopher Ifekandu Okigbo, born, 1932 in Ojoto, in present day Anambra state and widely regarded as one of the most important literary figures of the 20th century was the poet under review at the July session.

Setting the tone for the evening, the founder of the Uyo Book Club, the erudite writer and media scholar, Dr Udeme Nana reechoed the need and the impact of nurturing and sustaining reading culture in the society and the watchdog roles which the literati in general must play to ensure that a sane, humanistic society is planted.

Dr Nana then took out time to introduce the visiting reader of the day, Professor Joe Ushie, a renowned poet and teacher at the University of Uyo, who was to later read from his numerous anthologies.

Dr Nana also intimated that beyond the readings of Professor Ushie, the major discussions of the evening were to center on the life, times and works of the late Christopher Okigbo.

Reading a festschrift of his anthologies, Ushie amplified on the imperatives and roles of the writer in the society, describing writers as ‘harbingers of the conscience of the society’.

High point of the evening was the reading of a biographical extract on the late Christopher Okigbo by Dr Martin Akpan, himself a brilliant author and poet as well as the voicing of one of Okigbo’s poems, ‘The Pathway’, published just before the Nigerian Civil War of 1967.

Commenting on the works and impact of the late Okigbo, the patron of the Uyo Book Club and the Honourable Commissioner for Environment and Petroleum, Akwa Ibom State, Dr Ekong Sampson, himself, a widely respected scholar and poet, reviewed the short yet impactful life of the late Okigbo who died in the trenches of Nsukka defending the cause of the secessionist Biafra during the Nigerian Civil War.

He paid tribute to the fact that Okigbo lived and died for a cause he so believed in, asserting that, in same vein, writers must ‘live for a cause, and if need be, die for same cause’, describing poets as ‘batteries that charge the society’.

All other speakers at the reading, including the former Association of Nigerian Authors(ANA), Akwa Ibom, Dr Martin Akpan, legendary minstrel, dramatist and ballardist, Dr Moses Akpabio, Linguist Nse Isong all spoke glowingly and with nostalgia about the short yet influential life of Okigbo in the arts and literature, describing him as a one poet who will continue to live through ages.

The discussants also took out time to pour encomiums of the Patron of the book club, Dr Sampson for his unflinching support to the promotion of art and scholarship in Nigeria over the years.

It should be recalled that the Uyo Book Club, a growing intellectual and literary hub meets every last Saturday of the month and is proudly hosted and housed by Watbridge Hotel&Suites, Uyo.