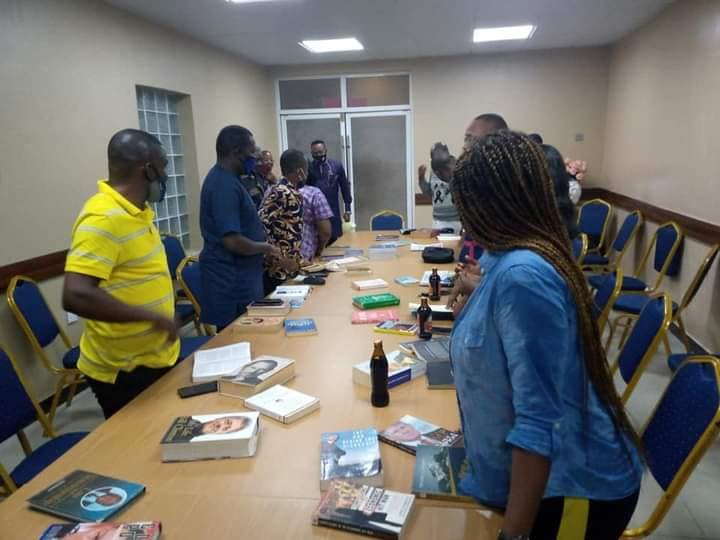 A thought provoking case has been made on the need for writers to harness the tools of their art towards the defence of democratic ideals and sustenance of democracy across the world.

The above view was the position of a respected scholar, lawyer and the immediate past Honourable Commissioner for Environment and Petroleum Resources, Akwa Ibom state, Rt Hon (Dr) Ekong Sampson when he spoke over the weekend during the Uyo Book Club August reading session held at The Shakespeare Room of Watbridge Hotel&Suites, Uyo.

The Saturday evening reading session was dedicated to William Shakespeare, the brilliant, prolific 16th century British author of about thirty-seven widely regarded dramatic works and in excess of about one hundred and fifty sonnets and club members who defied the heavy initial heavy downpour had their intellectual cups filled to brims with quality and scholarly engaging session.

Setting the tone for the day, the founder of the book club and revered media scholar, Dr Udeme Nana, welcomed all and reiterated his desire to see to the spread of avid reading and writing in not just every suburb of Akwa Ibom but the country in general. He stressed his belief that reading refines sensibilities , opens up the mind and inspires creativity among people.

Dr Nana told the audience that readers are men and women of high culture and ideals and hoped that sooner , Uyo would take its place as a location of intellectual tourism.

The lead discussant of the evening and an eminent professor of English stylistics at the University of Uyo, Prof. Joe Ushie then mounted the rostrum to tear Shakespeare into pieces, holding the audience spellbound and revealing the unique stories and life instances which inspired all those great comedies, tragedies and sonnets.

Taking on the discussion floor, Dr Ekong Sampson, re- echoed on the role of writers as watchdogs and paragons of societal conscience and reorientation.

He admonished writers to stand up and use the powers of their pens and persona to help nib the emerging military usurpation of Mali towards ensuring that a bad precedent is not allowed to happen across the continent. He regaled the audience with the legend of the once great Mali empire and one of its great leaders , Mansa Musa who was , perhaps the richest leader in his time.

On his part, the special guest of the day and Deputy Governor of Akwa Ibom state, Mr Moses Ekpo, represented by his Press Chief, Ekikere Umoh hailed the book club for daring to rescue the nearly extinct reading culture in the state and amplified on the need to take the club to the next level through strategic partnerships.

The session which began about 5pm was so robust and engaging that it nearly lasted into the 10pm curfew deadline in the State and had as one of its high points, the presentation of a signed copy of Ini Ite’s Ekong Nkeé to the Deputy Governor by Dr Sampson.

The Uyo Book Club meets every last Saturday of the month and is proudly hosted by the top rated, Watsbridge Hotel&Suites, Uyo.

One Reply to “Ekong Sampson charges writers to defend Democracy”