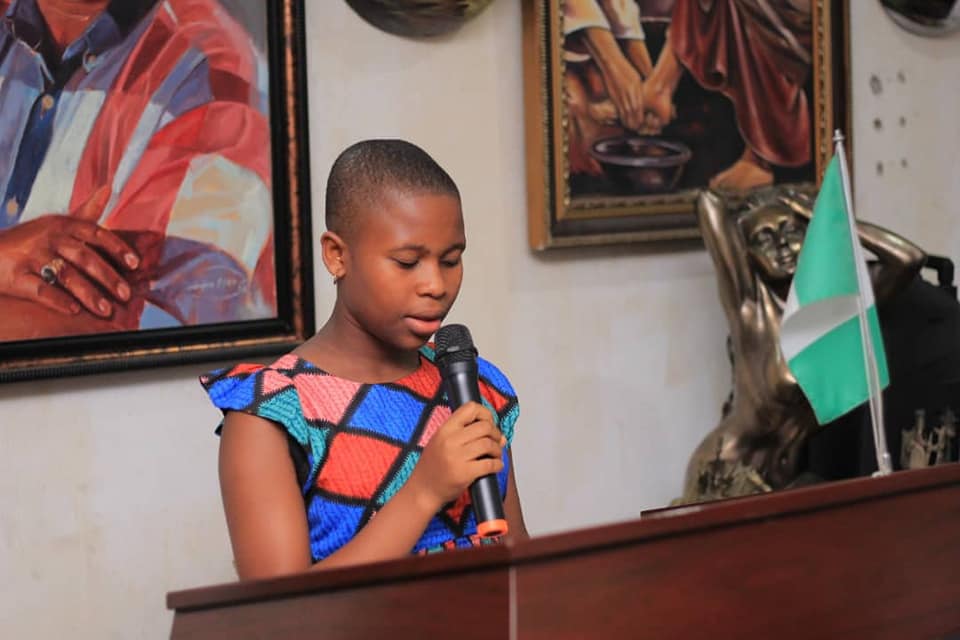 We had come to the conclusion after previous reviews, I hope, that the just ended 2nd National Book Clubs Conference held in Uyo was an event worthy of many stories. We will keep telling these stories – and more – for there are too many untold African Stories.

This is our story.

You will read of a city, you will read of her people – where they gathered, and why they assembled together; teachers, achievers, writers, learners, dreamers, beginners, problem solvers, and goal setters. But guess what? They all have one thing in common!

It was a gathering ordained to be, engraved in the sands of time. To Ikot Ekpene they journeyed; to the city of craftsmanship, the nest of originality, the home of creativity, the heartland of the Annang people. Bold, Uncommon, Industrious, and innovative.

The host is a distinguished Patron of the Arts, ardent collector of artifacts, a passionate Library enthusiast, a man well versed in the culture of his people. Abom Tony Esu, debonair, graceful, cultured in the finest of forms. For those who know, this name, rings a bell in the political strata of our Country, Nigeria.

The entourage from Mkpatak arrived a little behind schedule for the September 17th, reading session of RCBC. For anyone who’s been to Mkpatak before, the apologies tendered had to be not only understandable, but also forgivable. But, that is a story for another day!

After the flurry of welcomes, introductions, embraces, back-slapping and handshakes, everyone eased into the already set conviviality of the audience comprised of youngsters and elders.

Some say it is easy to look at the present and foretell the future. The excellent book review by two of the youngsters brought this adage to glaring life. In my place I’ve often heard it said: “Eyop àtonghò kè ètok adó àdüék!” By their fruits, you shall know them.

The Scripture admonishes to Train up a child in the way he/she should go, and when he/she grows up, they will never depart from it. That is the mission of Book Clubs. To catch them young, train and show them the pathway!

Inimfon Charles Esu in her indepth review of ‘Acres of Diamonds’ written by Russell Conwell, was a case in point of excellence not growing far from its roots. We know it will grow into a mighty oak tree as the years unfurl its petals. We pray for many fruits in the harvest.

Inimfon led the audience with a conciseness that belies her age. This amazing story calls us to the awareness of opportunities that exist within our reach – only if we would open our eyes to see them. The lesson is simple: you need not to look elsewhere for opportunity, achievement, or fortune. They lie within your reach, in your family, community or workplace. And like it’s said in Nigeria, “Wetin dey for Sokoto, e dey for sökötö! Indeed, as some will tell you after they’ve learned, the grass is not always greener across the fence.

As I write this, a niggling question surfaces in my mind, should we forget about checking out to greener pastures like Andrew did? How then do we explain the exodus of our trained professionals to other countries abroad? If we juxtapose this with the story “Acres of Diamonds”, should our University lecturers, medical Doctors and Nurses, stay put in Nigeria and be blinded to opportunities outside?

Too often, opportunities come to people as problems. When they are pulled
from the ground, diamonds don’t look like the brilliant, multi-faceted gems that we all know and treasure. They come disguised as rough-hewn, colorful rocks. It takes a trained eye to recognize them. In the same way, opportunities come disguised in “work clothes” – feeling dismayed that fate has dealt you a wrong hand – (nsuto uwà), but these problems or challenges can be overcome.

The opportunities we seek in the quest for betterment of our status and fulfilment of our dreams are probably, closer than we think, in our very own backyard. I believe Russell Conwell is issuing a reminder: You already own a diamond 💎 mine – learn how to mine it! Make lemons out of your lemonade. Build your castle from the rocks hurled at you.

Estelle Sokari presented her review of Sam Adeyemi’s book “Ideas Rule The World” effortlessly, with style and grace. The lesson from this book is quite simple also. *You can move from failure to success;
from lack to abundance; by receiving ideas
and by turning those ideas into reality.

The world as it is today has transformed drastically from what it was centuries ago. Ideas have birthed revolutionary change. Mark Zuckerberg created Facebook, Bill Gates invented Microsoft, Thomas Edison is credited with thousands of inventions, including the phonograph, the electric light bulb, and the telephone. Innovations have birthed androids/smart phones, slim computers fitted with cutting edge technology. All these are people’s ideas – those who think out of the box. Now, pounded yam can be made out of dried yam flour, stirred in a pot, instead of the monotony of boiling and pounding in a mortar as our grandparents did. Soups are canned, and the blender can slice Ikòng Ubòng – the green leafy vegetable used in preparing our famed “Edikan Iköng” soup! The question is; are you deploying your mind to think, to create, as God created the world out of nothingness?

A most educative teaching was done by Dr. Collins Edet who talked about the Fathers of Philosophy. Aristotle, Plato, Epitectus, Epicurus, and Socrates. Their lessons are specific and relevant today as much as they were ages ago.

✅ Focus on things you can control.
✅ Have no fear of death.
✅ Don’t disturb yourself over things out of your power.
📌 Epitectus: Refinement of character
📌 Plato: Allow reason to guide
📌 Epicurus: Choose your pleasures wisely. God expects you to flourish, multiply, replenish.
📌 Aristotle: Make friends with like-minded people, morally upright, people of integrity.
📌 Socrates: Ask questions – move above your contemporaries.

The interactive reading session was exciting and quite interesting as Abom called on readers to read certain pages of the book; The Art of Living. He spoke of his own life philosophy, of being a Stoic – Enduring, tolerant, indifferent, like the disciples of Christ..Peter, who kept at the gospel, despite threats of death, and the spectre of ending up as Stephen and John. The session was moderated by Dr. Collins Edet.

As the evening progressed another highlight was the observance of the DEAR (Drop Everything And Read) Moment.
Thereafter, the floor was thrown open for remarks by the special guest, Sen. Emmanuel I. Essien, Mr. Richard Mammah, President NBRP, short speeches and a vote of thanks.

The event came to a fulfilling close after the closing prayers. As listed in the agenda, one thing was found missing in the order of activities, just before departure.

That is a story the stomach can recount better (smiles) 😆 And for those who missed this very important session, you should know, that you missed out on the sumptuous, mouth-watering delicacies served at the Aboms Palace!

Quite forgivable though, as second helpings were washed down with our potent local “Palm Wine!” Like Epicurus ordered, we chose our pleasures wisely, and in like manner after Epitectus, we did it with refinement of character! 😁😁😁

By UBC DeskSeptember 21, 2022Events, ReviewsComment on Uyo Book Club Conference 2022: Yet Another Story