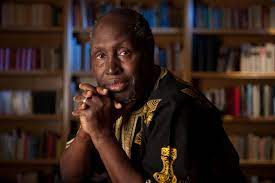 I grew up in a home filled with books. One of the categories of books I got exposed to in my early years was novels by African writers. These books to a great extent shaped my understanding of and perception of the continent of Africa and its people. In no particular order, here is a list of my top 10 classic African writers everyone should read.

If you have not read nor heard about the novel, Things fall apart, let me see your hands up. I dare say only a few hands would be raised. Late Professor Chinua Achebe is described as the father of African literature. His classic novel, Things Fall Apart is the most popular African novel of all time and was written to showcase the culture and identity of Africa to the world. He influenced and inspired a new generation of writers from Africa.

Kenyan author and playwright, Prof Ngugi Ngũgĩ wa Thiong’o is one of the literary giants of the continent. His novels, Weep not child, A grain of wheat, and The River Between, brought me to speed with life in Kenya and the Mau Mau political struggle for independence of Kenya.

The beautiful ones are not yet born is a classic from this Ghanaian writer. The central theme of corruption is what we are still grappling with on the continent.

The late Peter Abraham’s novels; Mine Boy and Tell Freedom were one of the most influential books of my childhood. Reading the narratives made me see the horrors of the apartheid regime in South Africa.

Late Flora Nwapa is acclaimed as the mother of modern African literature. Efuru and Idu were novels that were ahead of their time and told the stories of strong independent women, the ideal of the modern feminist movement.

Nobel Laureate Prof Wole Soyinka is a living legend and his numerous plays shaped my childhood. The Lion and the Jewel, Kongi’s harvest, The Trials of Brother Jero, The road etc, are all classics.

Consummate storyteller, Cyprian Ekwensi is very popular in Nigeria and West Africa for his short stories and novellas. I can recall books like An African night’s entertainment, Jagua Nana, Burning Grass etc.

The late novelist was another consummate storyteller. His novels, The Concubine, and The Great Ponds were riveting tales.

I read The African child (L’ Enfant noir) at a sitting and I got hooked on the story of the author’s life. This Guinean writer was one of the pioneers of Francophone African literature.

I choose to give this spot to the series of popular fiction written by notable African writers, and published by the popular Macmillan publishing firm in the ’80s and 90s. The now rested pacesetter series was popular among teenagers and young adults in Africa.

What are your top classic writers? Share your thoughts.

One Reply to “Top 10 Classic African writers everyone should read”