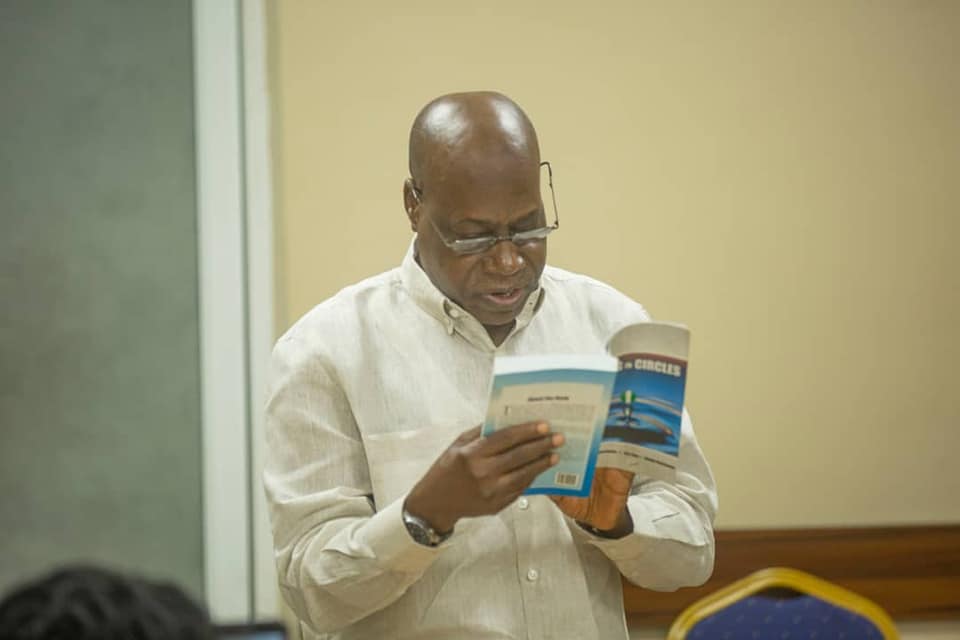 Some participants called it intellectual intercourse, other delighted book wormers and writers present described it as intellectual communion. The visit of Mr. Ray Ekpu, one of Africa’s most read journalists and former editor of Newswatch magazine to Uyo book club on Saturday 27th July 2019 electrified the atmosphere in the Shakespeare Conference Hall of WATBRIDGE HOTEL venue, as the readers sat face to face with a man most of them had been dreaming to glimpse at, having read and been inspired by works of the wordsmith.

Dr. Nana thereafter thrilled the attendees with poems and verses of Shakespearean standard which he wrote as a teenager.
Amidst very emotional exhortation, aimed at inspiring people, Mr. Ekpu described as occupiers of the office of the citizen, the veteran writer poured thick liquids from the reservoir of his intellectual depth. Very juicy contents to inspire the people amidst intermittent interruptions caused by loud ovations.

Mr. Ekpu told the Bookworms that “solutions to problems in the world can be found in books, observing that the benefits of reading are unquantifiable”.

He regretted that the dominant culture in Nigeria is anti-intellectualism stating that in Nigeria, the budgetary allocation to fund education by the Nigerian Government over the years have been far below United Nations benchmark.

He challenged the younger generation of Nigerians to occupy, in a more effective way, the office of the citizen in a democratic society, and think deeply, fight for their rights and for good governance in the country.
He also took turn to read from the book “Moving in Circles” a collection of select columns by the quartet, Ray Ekpu, Dan Agbese, Yakubu Mohammed and Soji Akinrinade.

Mr. Ray Ekpu urged the Uyo Book Club to move into secondary schools in both rural and urban areas to mobilize youths and stimulate their interest in reading.

He donated some books from the Newswatch stable to the Book Club and applauded the vision of the founder of the Uyo Book Club, Dr. Udeme Nana, for embarking on such a noble venture in a society where most people were chasing money and material things.

Highpoint of the event was the question and answer session where participants raised critical concerns in attempt to gain more knowledge and extract more honey from the intellectual honeycomb of the visitor.

The session however ended with a group photograph session.

One Reply to “Ray Ekpu lights up Uyo Book Club”