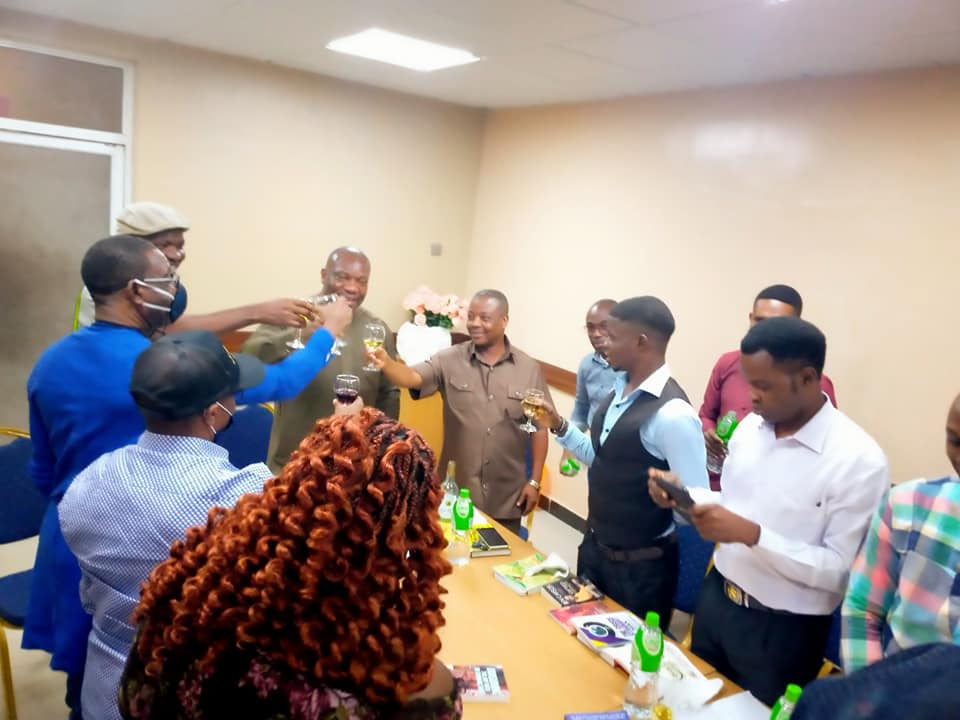 A fast growing intellectual group, the Uyo Book Club held its special anniversary reading session last Saturday to join forces with all people of goodwill  in celebrating Akwa Ibom at thirty-three. The session which was held at the William Shakespeare Room of top rated hospitality outfit, Watbridge Hotel&Suites, Uyo had a rich coterie of some of the state’s finest scholars in attendance.

Setting the tone for the day, the founder of the book club, Dr Udeme Nana in his opening lines welcomed all to the session and made a case for sober reflections on the Akwa Ibom journey to statehood now that she had clocked three decades and a triple years.

Reading from his poem titled, ‘A Song for Akwa Ibom’, the erstwhile Press Chief to former Governor Victor Attah drew up memories of the Akwa Ibom creation fairytale which had thrown the state into a carnival-like frenzy on that day in 1987.

He summed up his reading by declaring that ‘Akwa Ibom at thirty-three christened to celebrate the vastness of the Almighty God stands firm and majestic, roaring like a hungry lion with her potentials offering immense possibilities on land, air and sea’.

Also offering poetic festschrifts on Akwa Ibom at thirty-three, renowned medical doctor, poet and author, Dr Martin Akpan read from his poem titled ‘My Songs For Akwa Ibom’, where he paid tributes to the early seers of the Akwa Ibom dream including the likes of the late Sir Egbert Udo Udoma, Obong Sampson Udo Udiong, Chief Nyong Essien, Dr Bassey Udo Adiaha Attah, and the rest ‘instruments of light’ who jointly conjured the initial wands that raised the consciousness for state creation.

Taking to the floor to offer his own review of Akwa Ibom at Thirty-three, the patron of the Uyo Book Club and immediate past Honourable Commissioner for Environment and Petroleum, Akwa Ibom state, Rt Hon (Dr) Ekong Sampson spoke glowingly of Akwa Ibom’s steady rise since creation and the undeniable rich potentials reposed in the state and her people, urging all to key into the Akwa Ibom dream by ‘playing their parts’ in the state’s march towards her el dorado.

To Dr Sampson, the state had come of age and it was indeed, time for true diversification, asserting that it was time we looked beyond oil and seeked to explore the state’s other numerous rich potentials so as to achieve a balanced economy which will act as a safety belt for the people.

The erstwhile Mkpat Enin lawmaker particularly praised Governor Udom Emmanuel’s daring and very visionary projects such as the Ibom Air, which according to him ‘is a bold statement of intent to diversify and one project which has earned the state respect in the league of other states and even the international community’.

Dr Sampson particularly assured that the future is very bright for the state and charged the Akwa Ibom millenials to draw up inspirations from the ‘Merchants of Lights’ in aiming for the sky in their chosen fields of endeavor. He rounded up his speech by calling for regional integration among the Niger Delta states, a move he believes was the needed bit of the jigsaw that will instigate rapid growth and development of the region.

Others who spoke during the session included legendary former permanent Secretary in the state, Elder Namso Umoren, Secretary of the Civil Liberties Organization (CLO) in the state, Barr. Eyibio Eyibio, and host of others.

High point of the session was the cutting of the cake and singing of birthday songs in honour of the patron of the book club, Dr Ekong Sampson who had turned a year older just a few days earlier.

The Uyo Book Club one hundred books for one hundred thousand naira a year prize is still on and the intellectual group is proudly housed by Watbridge Hotel&Suites, Uyo.