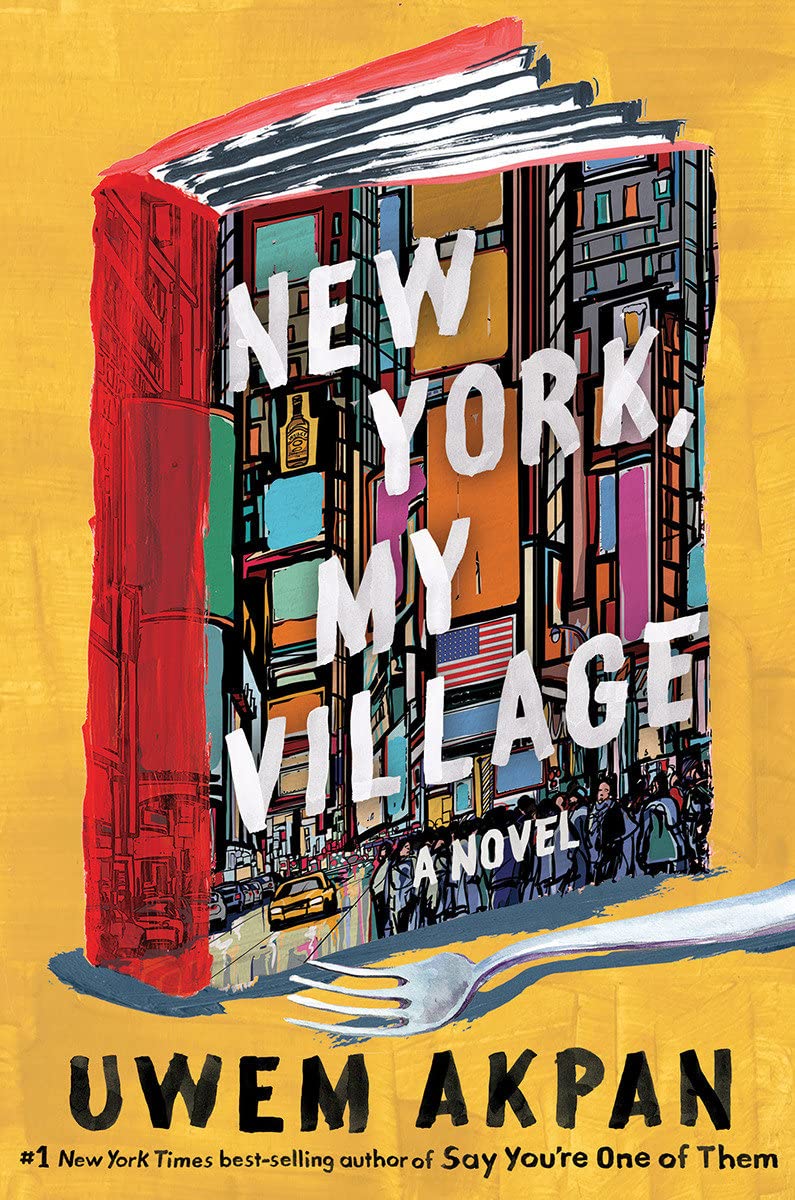 “Who does not know the evils of war cannot appreciate its benefits.”
– Sun Tzu

It is wise not to judge a book by its cover. I should also add, not to make a full and final judgment
on account of a book review. A review is often slanted according to the whim and preference of
the author. It is common for a typical writer to appropriate a generous dose of liberty and freedom of speech. Sometimes writers and public commentators may even feel entitled to almost
boundless freedom to ignore social boundaries. Hence, there is a need to exercise caution in
assessing viewpoints that may be inferred solely from a book cover or review.

The raving reviews and raging fallouts of Uwem Akpan’s book, NEW YORK MY VILLAGE compels, in my view, a full reading of the entire book to enable an informed position. I just did. The story and message of the author are not entirely reflective of the visceral, provocative and slanted bent of most reviews out there. Akpan tells the war story as experienced by Ekong Udousoro, the main character. Ekong means ‘war’ in Annang language. Ekong’s anger and lingering pain on account of the woes of war – the so-called Biafran War, are not disguised. His words are not coded. He speaks in plain language and almost defiant tone about “Biafran atrocities in minority lands.” He exhibits righteous anger to render the unpopular and long-suppressed version of the Biafran War story from the perspective of the minority tribes that were coerced into the Biafran enclave. The author narrates the travails and traumas that had befallen Ekong’s family, the land and people of Annang tribe in Akwa Ibom State of today. His father is reported to have been maliciously tortured and brutally murdered during the war.

Annangland which was forced to be the epicentre of the horrific war theatre bears the indelible brunt of war many decades after military combat ended in 1970. Annangland and its people suffered double jeopardy. They were battered by both proponents of the war – the Biafran and Nigerian military forces. Akpan insists that the hurt, pain, and scars of the war continue to impoverish and haunt the minority tribes of the Niger Delta region several years after the war supposedly ended. For these minorities, the fallouts of the war continue to rage in many unpleasant ways. A caring Catholic priest of Irish origin, Father Gary Walsh, who played a guardian angel role to stem the tide of inhumane atrocities during the war by rampaging Igbo Biafran militias, provides a fitting abstract to Akpan’s minority story:

Expectedly, Akpan’s version of the Biafran War story is being muffled by the loud cry and earlier renditions of the Igbo version, the magnified victims and ‘Owners of precious Biafra.’ The author’s rather late submission of a Minority Report of the war is now being drowned by the vocal majors of Nigeria’s troika tribes. It’s alleged that his account debunks and questions some long-held and settled claims by the literary oracles and deities of the major tribes. For instance, the submission by the renowned literary icon, Chinua Achebe in his book, There Was a Country, painting the Igbos as the sole and perpetual victims of the Biafran War should, as a given, be held sacrosanct.

Akpan’s minority report on the same war is not necessarily a counterpoise to Achebe’s or a surfeit of similar and popular viewpoints on the war. The author makes no such claims. His focus and objective is to present how the minority tribes in Nigeria were grievously impacted by the war. Period. Understandably, his choice of colours in painting the picture of the war scene in Annangland and other minority tribes distinct from the Igbo perspective and indeed the rest of Nigeria ought to be different. The outcome of his work is peculiar to his primary subject of interest – Annangland and its people – in contra-distinction to happenings in other theatres of the war.

The author skillfully embeds the minority Biafran story in the labyrinth of Ekong’s American Odyssey. During his sojourn in New York as a sponsored intern to understudy the art and business of publishing in America, he experienced the good, the bad and the discriminating ugly sides of a country with an avowed godly creed; In God We Trust! He was dispirited by the revolting revelations of the ‘hidden slippery racism’ in the 21st century in America. He was challenged to find the dexterity to navigate sneering stereotypes and narcissistic personality disorders of most white folks he encountered. Akpan, in his book, gives voice to the suppressed and voiceless minorities. He provides them with a ladder to climb, to be seen and to proclaim their collective plight of marginalization and suppression. He amplifies the group feeling and lamentation of the minorities that ‘it is not enough to have a sense of one’s worth if other people do not publicly acknowledge it or worse yet if they denigrate or don’t acknowledge one’s existence,’ paraphrasing the submission of Francis Fukuyama in his book, Identity: The Demand for Dignity and the Politics of Resentment.

Ekong proclaims his Annang heritage with pride. The author amplifies that with a writing style that seemingly validates the traditional saying about Annangs being, “folks who hold eloquence and peace in one hand and machetes and stubbornness in the other.” The book is categorized as a novel. It is segmented into thirty-five reader-friendly chapters spread over four hundred and eighty-one pages. Though presumed as a work of fiction, Akpan is frank, eloquent and loud in describing real-life events to which many can relate. The author is brazen in interjecting Annang dialect generously in his free-flowing narrative. Not Efik. He insists on using ata iko Annang ayid, profanities inclusive, without due care to interpret to the non-Annang speaking audience. He remains unapologetic about this deliberate intrusion. It smacks of a stubborn streak. He appears bent on his intentional imposition to graft the Annang dialect onto the universal lexicon. He reserves the most graphic and revelatory for the last in the acknowledgement section, all of thirty-seven pages (pp.443-481).

In this section that should open with a caveat (faint-hearted and bigots beware), he rips off the veneer of fiction to render a rather creepy account of the atrocities of war as reported by eyewitnesses. The scholar in him – a professor of creative writing at the University of Florida, USA – duly acknowledges that writing about direct and inherited traumas of all kinds of war is a herculean task. It is subject to incendiary tendencies and consequences. The inherent risk is not enough to deter him from offloading the agonizing burden of war and the indignity and travails the Annang people suffered during the Biafran War.

It is in the character of genuine writers, as Gunter Grass observes, “not to leave the past in peace: they are quick to open closed wounds, peer behind closed doors, find skeletons in the cupboard, and consume sacred cows.” Akpan, a reputed writer of global reckoning, has dared to wake a sleeping dog. Perhaps, a roaring lion will be a more fitting metaphor considering the apparent resurrection, vibrancy and currency of the Biafran sentiment at this time, in Nigeria. It is not for want of a fight or another war. The stern warning from Lieutenant Colonel Etuk, who fought in the war and later turned teacher at the Seminary, echoes: “Make no mistake; war is not good for anyone. The best thing is not to start one.” The author writes more for the hope of relief for war victims from agonizing hurt, burdensome pains and soothing closure to a horrendous past. He is inspired by the prospect of his minority war stories to enrich literature, educate people, heal wounds, refine our politics, ennoble society and shape our nation for good. He writes to preserve historical facts for posterity. It helps to be reminded of this past, toxic and sordid history it may be. Otherwise, we risk repeating them to our peril.

There is a weird feeling that Akpan’s minority story of the Biafran War gives hope if read and received without the traditional prejudice. Hope that engenders humility to acknowledge guilt even though inherited. Such hope opens up pathways for redress and closure from war crimes and pains. And hope that promotes fairness, equity and justice for victims of a vicious war, beyond the Igbo-centric Biafra. In that optimistic spirit, irrespective of all the things that differentiate us, we can find and nurture the humility, tenderness, brotherhood, and friendship to negotiate and navigate our increasingly tainted and fragile inhabited space called Nigeria. Achebe had cause to admonish, if only on the grounds of moral sentiments, that “What a country needs to do is be fair to all citizens – whether people are of different ethnicity or gender.”
The shorthand of Achebe’s exhortation is to promote a true sense of belonging for every citizen. Akpan in his book, NEW YORK MY VILLAGE, attempts to expound on that noble ethics.

By UBC DeskAugust 30, 2022Book ReviewsComment on New York My Village: A Review by Anie Sunny Udoh