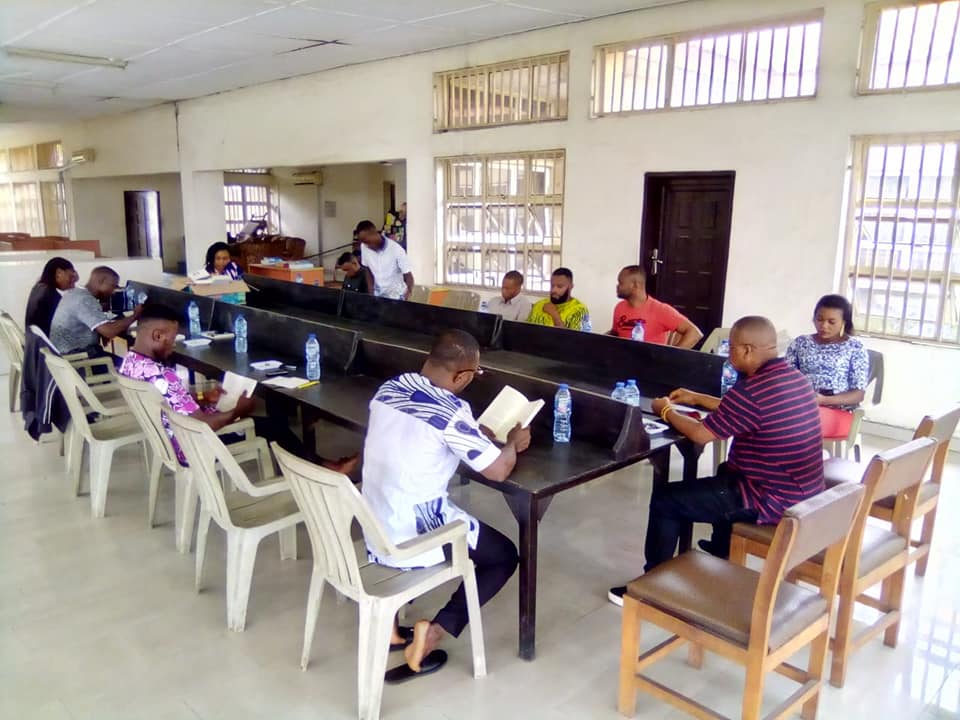 The trip to Abak was short, made easier by the smooth and well-paved road between Uyo and Abak.  I turned into the Abak – Ekparakwa road and was pleasantly surprised to see the Abak Divisional Library in great shape. I went into the premises and saw the well-kept lawns and neat environment. I walked inside and was welcomed by an equally sparkling sight, as the seats and reading tables were in good condition. Members like Mary Jonas, Uko Edet, Inyene Peter, Nsisong Idung, young spoken word sensation Rosebeth Cletus, Ifiokobong, Dominic Umoh, Good news Sam, Edidiong Isonguyo and Meekness Asuquo were all engrossed in their observance of the Drop Everything And Read moment

The bookshelves, in well-arranged rows, invited me to examine the books they hold and I embraced the offer with both hands. Another surprise was coming face to face with old books which were still intact even though their covers looked their age; from South Eastern State Library Board but I was not bothered as books don’t really age.

I got excited as I captured the classic Robin Hood – The outlaw of Sherwood Forest, Wow!

The Book, written by Orville Prescott and published in 1963 is an account of a famous outlaw who terrorised   Nottinghamshire: Robin Hood robbed the rich to share proceeds with the poor. In the process, he assembled a band of accomplices and outmanoeuvred the Sheriff who wanted him dead or alive. The Sheriff had even placed a bounty to motivate those who would take the chance to capture Robbin Hood.

As I read it, I remembered the books;  The Passport of Mallam Illia and Burning Grass written by Cyprian Ekwensi. The menace of Boko Haram and Islamic State of West Africa terrorists who are giving the Nigerian government a bloody nose came into sharp relief.  These murderous marauders including bandits and kidnappers seem to have taken lessons from Robbin Hood except that these ones kill for fun. Robbin Hood only killed two persons in his almost 20 years of rule in the forest. He wasn’t blood-thirsty. He wasn’t a religious irredentist. He didn’t abuse women and children. He didn’t rape.

Yes, like Sambisa like Sherwood forest! However, it took a new King to disguise himself as an Abbot and venture into the forest, Robbin Hood’s stronghold to trick the old trickster out of his tricks. King Richard succeeded where others before him failed by ‘charming’ Robin Hood momentarily away from his stronghold into service in his palace for the crown.

Robbin Hood was a brave revolutionary, he robbed the rich to redistribute his loot to the poor, and his band of outlaws were loyal and committed to him and his ideology; they stood by each other and maintained a high degree of discipline.

There’s fiction and there’s non-fiction but either way, the art of writing is aided by legend, oral or written history, personal experience or futuristic postulations.

Who will trick ISWAP and Boko Haram, smoke them out from their hideouts and give them jobs inside Aso Rock so Nigerians can be free?

By UBC DeskJuly 12, 2022Featured PostsComment on My Encounter With Robin Hood at Abak Book Club