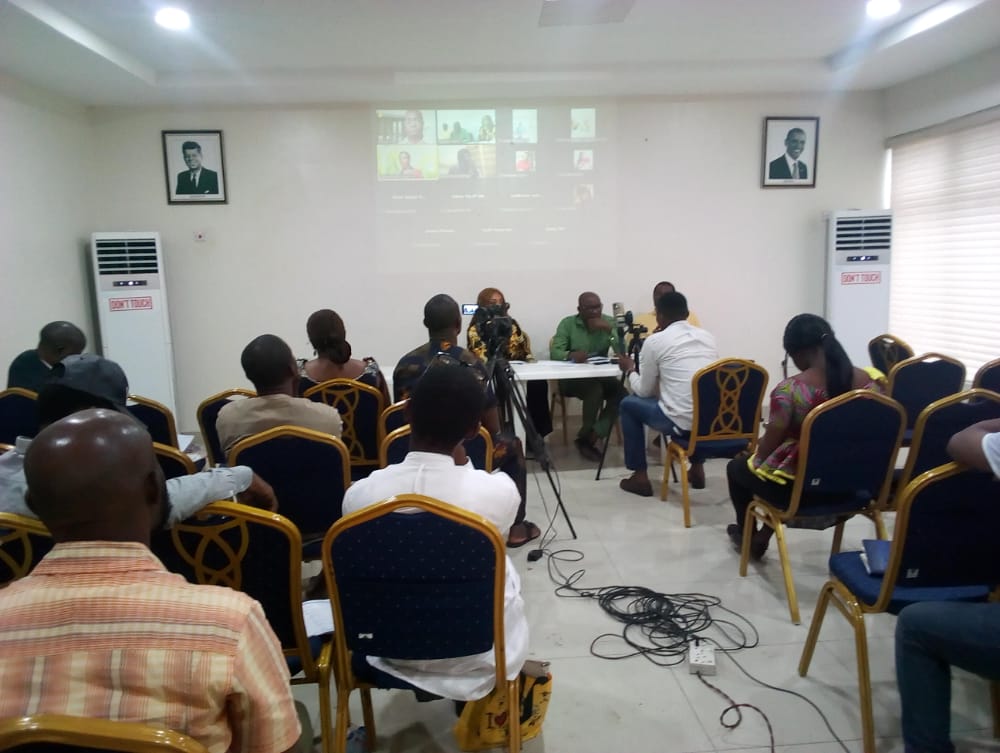 ‘…We give too much credit to writers’

THE Network of Book Clubs and Reading Culture Promoters in Nigeria (NBRP) held its second National Conference and Annual General Meeting from September 15 – 18, 2022 at Watbridge Hotel, Uyo, Akwa-Ibom state. It had in attendance writers, politicians, advocates, and diverse stakeholders in Nigeria’s literary ecosystem. This year’s conference theme ‘Nigerian and African Stories: How They Fare in the Global Village,’ which was held virtually on Friday, September 16, had a panel that consisted of lawyer, poet and human rights activist, Dr. Ogaga Ifowodo, literary critic, Ikhide Roland Ikheloa, lawyer, UnyimeAbasi Odong, Kate Ekanem-Hannum, performance poet, Iquo DianaAbasi, and shortlisted poet for The Nigeria Prize for Literature, Saddiq M. Dzukogi. The panel session was moderated by Prof Joe Ushie; poet and the current Dean of Arts, University of Uyo.

While speaking on the influence of the global village on African stories, Ogaga said, “Stories matter generally. Writing and speaking presumes an audience, and the very art of speaking distinguishes us from animals. Africans have suffered so much in the hands of history. We must tell tales about who we are, and what distinguishes us from others. We should tell our stories in a way that would contend with others. If we don’t tell our stories, they will be told for us by others. If we can’t represent ourselves, we can be denied our place on earth. So, we must tell our stories.

“The book is just a medium. There have always been stories told in oral forms, which later became represented in a written medium and passed on. The difference is that now you can say those things and other people can access them via the internet. If you want to tell an authentic story, the writer has to stay true to the news. The story doesn’t have to be one-sided or similar. There are other means of reading stories if people don’t want anything printed on paper.”

Ifowodo is concerned that writers are only cocooned in their writerly enclaves in the mistaken belief that their writing alone will somehow change society. He argued that writers, just like politicians and other change agents, should be involved in the engineering process that society needs to make progress. It’s perhaps what informs his involvement in partisan politics since returning home after over a decade of sojourn abroad.

“We would be deceiving ourselves if we think we can change the world with a book or poem,” he said. “A writer has to be involved in the process of making a positive impact in society.”

Ikheloa is unrelenting in his crusade to rein in African writers and stop them from pandering to the literary tastes of the West, but instead should be focused on authentic stories emanating from the diverse peoples of the continent. He urged African writers to find their authentic rhythm that does not make them literary hacks and lackeys to Western perceptions.

Sharing his thoughts on the subject, Ikheloa said, “We are still concerned about the opinion of the West on our stories. We have writers who wrote vibrant stories, and these stories are translated into English, and in doing this, things get lost. We have to talk about literature and narratives beyond what the West wants.

“The West is not the voice of Africa; they don’t have the voice to speak for us. We are not innovative enough and we keep on saying the same things repeatedly. We need to upgrade and think beyond the physical book. It’s like a music producer or artiste selling out cassettes when there are numerous websites for downloading and streaming music. And in the same way, a lot of writers now share their books on the internet, instead of publishing books.”

Odong is satisfied with the way things stand, insisting that authenticity in African writing is ever assured, as it has granted many access to the audience in the global village.

“If your story isn’t authentic, there could be a problem. Everyone knows human experiences are the same across the globe,” Odong said. “We can call a story ‘African’ when telling readers about a particular thing unfamiliar to them. As far as literature is concerned, we are good, and we write authentic African stories. I would say that we are tearing down the tapestry, which is the global village, and we have warmed ourselves into the global village.”

DianaAbasi said Ikheloa’s charge of pandering to the West is not necessary, as writers everywhere look for where the audience is and target it. African writers, she posited, are merely looking for audience that the West provides. She sued for improved economies in Africa that should also provide the right audience, so writers don’t have to look to the West. She also believes writing can change society positively when properly deployed.

For DianaAbasi, “Art is supposed to mirror life, so if we write about the bad things happening, that doesn’t make us bad people. We can actually use our writing to change people. On social media, we see people’s anger in their writing; it is honest and the creativity flows forth. We have millions of stories coming in different colours which we need to give good publicity.

“I don’t blame people looking to sell their books in the West, because we are also thinking of the bills we have to settle and we need the support. We need to find ways to make Africa as developed as the West, so people can read our stories. People want to sell their stories to the West because most people there will be interested in reading them. Knowledge of our history is also important for writing authentic stories.”

Dzukogi is of the same mind frame as Ifowodo when he said writers are overrated in their self-evangelising mission of changing society. But he also believes the message in a book is capable of making a difference in the way society orientates itself.

“Literature is a representation of the society,” Dzukogi said. “Sometimes, we give too much credit to writers, but writers can’t change a country’s situation. I think that is an unrealistic dream. We can only write about the environment of which we are a part of. Going back, most of our stories were oral, but the message is the important thing, not the medium. The book is still the best thing we have now and I see no reason to contest that fact, though there is a lot of reading engagement on the internet today.”