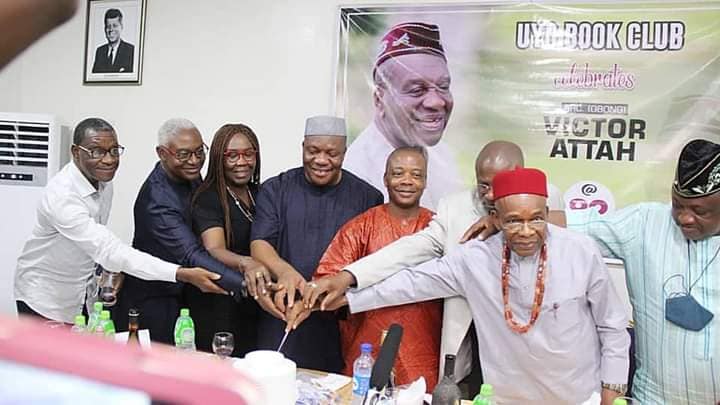 Following up from the recent festschrifts in honour of William Shakespeare, JP Clark and Ken Saro-Wiwa, the CityView Hall of Watbridge Hotel&Suites came alive again last Friday, as the Uyo Book Club held a colloquium to honour a former Governor of Akwa Ibom state, Arc.(Obong) Victor Attah who turned four scores and a double on same day.

The event which witnessed a rich roll call of dignitaries from across the political and literary worlds among other things, was designed to draw attention to the significant roles played by Obong Victor Attah in the current Akwa Ibom political and socio-developmental odyssey.

Opening the floor for the day, the founder of the Uyo Book Club, Dr Udeme Nana welcomed all to the colloquium and extolled the sterling qualities and visions of Obong Attah describing him as ‘a highly detribalized man who saw tomorrow’.

Dr Nana, himself a former Chief Press Secretary to Obong  Victor Attah described the octogenarian former Governor as ‘a book worthy of being studied’ and took out time to list some of his key legacies in the state including, the Le Meridien Ibom&Golf Resort, the Ibom Airport, several major roads, housing estates, among others.

In his keynote address, a former Federal legislator and Minister of Housing, Chief Nduese Essien, hailed Obong Attah as the man who ‘was very visionary, fought for the deprivation of Akwa Ibom and Niger Delta and gave the state a strong voice in national politics’. He decried what he termed ‘unnecessary abandonment of the development master plan expertly prepared for the state by Obong Attah by successive governments’.

Also adding to the tributes, a former PDP State Chairman during the Attah regime, Arc. Otu Ita Toyo, reminisced about Attah’s large heart in victory and in defeat and his accommodation of all shades of opinions. He raced about Attah’s vision in seeing into the future with the SIT Park , Ibaka Deep Seaport, the Airport which are economic drivers regretting the abandonment of some of those lofty projects. Chief Toyo, popularly known as ‘The Total Chair’, recalled with nostalgia Obong Attah’s grueling fisticuffs with the then President Olusegun Obasanjo for the control of resources by regions who owned it. A worthy fight that yielded the financial windfall most of the states are enjoying now.

On his part, another close ally of Obong Attah, Arc. Ezekiel Nyaetok recalled about the Shelter Afrique project and how Attah used it to empower Akwa Ibom indigenes who became major contractors, sub contractors and suppliers.He said Attah refused to name the estate after himself because, according to him, it was not ‘built with his personal funds’.

One of Attah’s protege and then Commissioner for Information, Prince Chris Abasi-Eyo enthused about Attah’s love for intellectualism and not mere possession of paper qualification, recounting how he was appointed a Commissioner at only thirty-three when he was not even a graduate nor Attah’s party member.

A retired major of the Nigerian Army, Barr. Ene Hogan recalled the role Obong Attah played in ensuring that grants were approved and money sent to Akwa Ibom Army personnel who were undergoing training in Kaduna and how no other state reached out to their own men. He observed that Attah as Governor made the Akwa Ibom State contingent proud.

Delivering a birthday toast, Patron of the Uyo Book Club, Barr.(Dr) Ekong Sampson hailed Obong Attah’s foresighted leadership and boldness. He reiterated his call for the restructuring of the country, believing it was the leeway towards attaining sustainable growth and development of the nation. Dr Sampson, himself the immediate past Commissioner for Environment and Petroleum, Akwa Ibom state decried what he calls the ‘desperation for power valves’, believing every good leader must be ready to make sacrifices just as Attah did.

Highpoint of the colloquium was the cutting of the birthday cake and singing of birthday songs.

Meanwhile, Rt.Hon. Chief Nduese Essien used the occasion to announce a donation of 50 Books towards the growth of the Book Club and an Akwa Ibom son based in Australia, Prof. Ndaeyo Uko also phoned in offering to sponsor a reading award on behalf of the Club for readers at the Primary School level starting from next year.

One Reply to “At Watbridge, Uyo Book Club comes alive for Obong Attah at 82”