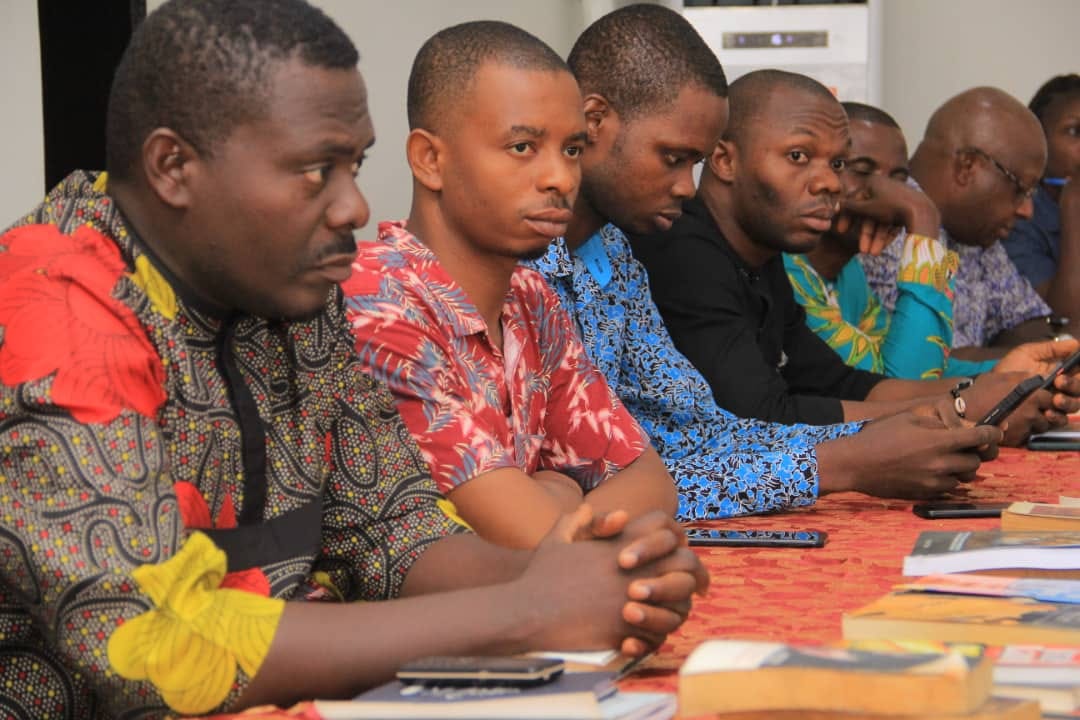 There is no way you wouldn’t have wished you were there. It is one of those meetings you did cry a river of tears for missing. It was an unusual evening, so sad that you missed it but if you can read this report, you can catch up with a few moments of the evening. If you can read this story, you would have at least eaten the crumps of the evening since you missed the whole loaf. Half loaf, they say is better than no bread but this write-up doesn’t even promise a half loaf of the evening. Crumbs look more like the deal.

The session was advertised to begin at 4pm. It is Africa, it’s a miracle when people keep to time promptly. The organizers of the evening, Uyo Book Club, are time-conscious people but they’re dealing with members of the public who are yet to come to terms with the value of time, so they gave it some time for others to catch up so that the meal of the evening wouldn’t be a waste. If they did start at the advertised time, more than 80% of those who attended would have missed everything.

This writer arrived Watbridge Hotel, the Venue of the Evening with Dr. Abraham at 4:38pm. Typical of Watbridge, the place was bubbling but there were more cars than usual, so many that some guests had to park outside the hotel’s premises.  A large crowd would be expected, so one wonders if the congestion in the parking space was a culmination of the expected crowd for the evening with Dr Abraham.

Uyo Book Club usually doesn’t pull a very large crowd. Book events remain a turn-off for many people but not where Dr Abraham,  the man whose faith built Top Faith Schools from a pipeline dream to the reality of an Ivy League school in an interior village of Mkpatak, Essien Udim is involved. Dr.  Abraham was expected to tell his book-loving audience every step of the way to the top where Topfaith now stands. An interesting story should interest the majority. Perhaps it is why Watbridge had something like a population explosion that evening, one would easily conclude.

Seeing the scenario outside the hotel, I pinched myself. It is my own way of punishing myself for being 38 minutes late to the all-important evening. Pace up, I did. I’m almost panting as I approached the regular venue, The Shakespeare’s Hall. I’m jolted by the faces in the hall as I push the door open.

Instead of a large crowd, four men were talking in a standing position. Talking amongst themselves and all to themselves. There is something amiss. I was probably in the wrong venue but I could recognize the faces of the men in the hall.

In the hall was the progenitor of the Book Club initiative in Akwa Ibom State, Dr Udeme Nana,  former Media Adviser to the then Governor Victor Attah, the candidate for Eket Senatorial district on the platform of the Peoples Democratic Party,  Dr. Ekong Sampson stood with others. Although seeing him for the first time, I could recognize that the other man with a different complexion from the other two men, was our special guest for the evening.

Interrupt these great men? That’s sacrilegious. If my feet could keep me for a few more seconds, I did apologize. Perhaps they could tell that I was sorry by the speed at which my feet reversed. Samuel Udoma, Dr. Ekong Sampson’s star aide who stood a few meters away from the small gathering came after me once he figured out my confusion. Of course, he came with the information that cured my confusion. I thanked him as he directed me to the actual venue of “An Evening With Dr. Abraham”

The actual Venue was the City View Hall of the Letters House, an extended facility of Watbridge Hotel sited opposite the left wing of the main hotel. The organizers must have reasoned that the usual Shakespeare’s Hall would be too small for “An Evening With Dr Abraham.” They were right because as it turned out, the special venue of the evening was almost filled to capacity at the time of my arrival. There was an overflow a few minutes after proceedings began. The capacity of the hall isn’t more than 100 but you can be sure that a 100 people capacity hall would normally be too big for a book event except that this particular book event turned out to surprise everybody.

The first surprise of the evening came from one Miss Imaobong Okpon whose obligation was to review Dr Martin Akpan’s THE CRUMB EATERS. “This is my first time”,  she warned. “Pardon me if I don’t do well as I don’t have a background in literature “, she begged.

By the time Imaobong was done, everyone wondered how a first-time reviewer could be that good, how a reviewer of non literally background could put up a brilliant review that swept professors off their feet. Among the Professors on feet to commend Miss Okpon was the Dean of Arts, celebrated poet and Professor of Stylistics in the Department of English and Literally Studies, University of Uyo, Professor  Joseph Akawu Ushie.

Once the rain of commendation was over, it was Dr Martin Akpan’s turn to introduce the star guest everyone had come to see.

“I don’t know if I am chosen to introduce Dr Emmanuel Abraham because we were both classmates or that we both had the same grades upon graduation “, Dr Akpan began what turned out to be a luxurious display of oratory. Dr Akpan is a known orator, prolific writer and former Chairman of Association of Nigerian Authors, Akwa Ibom State but the resounding applause precipitated by his introduction of his friend of many decades, suggested loudly that he had surpassed many known precedents. The applause heralded the moment everyone had been waiting for.

As the event wore on, everyone in the hall laughed at the joke of a Professor being called a boy. “He is my boy”,  the slim, smart, sweet-looking man said authoritatively.

It is Professor Joe Ushie he is talking about. Ushie, the revered Dean of Art Faculty whose poetry has won laurels and awards from every part of the world. Ushie, the strong man of ASUU whose activist might have brought dictators to their knees. How can the same man now be said to be somebody’s boy? Who is this somebody?

As you can imagine, there were moments of teasing and plenty of laughter. Laughter like the one that sparked out when Dr. Arnold Udoaka called the legendary Prof. Ushie “my boy “.

When Dr Emmanuel Abraham told his story of a spot he sat weeping in the University of Calabar when he couldn’t afford to pay his school fees and consequently didn’t have a hostel space and meal ticket, it was an excited Dr. Arnold Udoaka that reminded that it was on that same spot that Dr Emmanuel Abraham eventually delivered the valedictorian’s speech years after when he emerged the best graduating student of his time.

The year of that speech was 1981. That speech has been documented in a page of the autobiography titled THE PREVIOUS HOURS OF MY PRESENT DAYS. That was the book of the evening and the author, Dr. Emmanuel Abraham opened a page of the book to read the valedictorian’s speech written and presented in 1981. A great speech, it was, to say the least. The speech said profound things, raising issues that remain issues under contention almost four decades after.

“If we cannot develop human resources, we may not be able to develop anything else ” a line of the speech had rightly said. What a profound statement coming from a student. The statement simply gives an idea of the depth of Dr. Emmanuel Abraham’s intelligence. Of course, it is that intelligence that won him a scholarship since he didn’t have the privilege of being born with a silver spoon.

Not being born with a silver spoon, young Abraham suffered. He has told the story in his autobiography read that evening to members of Uyo Book Club. Stories of how he trekked all the way from his village, a very interior part of Essien Udim, down to Ikot Ekpene, were told that evening. Stories of Dr Abraham’s sense of hard work and his faith in God was well told that evening. The faith that made a young secondary school leaver dare to aspire for a University education even without money, sponsor or hope from anywhere. The faith that made Dr. Abraham abandon the comfort of good-paying jobs to dream of the establishment of an Ivy League school that will provide the much-needed quality education for his country. The faith that made him believe that the Ivy League school will flourish despite being sited in an interior village called Mkpatak.

Mkpatak was a village before the advent of Topfaith. There were no good roads and electricity but Dr. Abraham believed that his school was a light that shines brighter than electricity. He believed that the light of his school will shine from a dark village such that the whole world will trace the star to his village, like the biblical wise men in search of a born messiah. Such faith was top faith.

True to his faith, wise men and women have traced the star shining from Mkpatak. The search for a good education has seen thousands following the light of Topfaith down to Mkpatak.

Mkpatak is now a beautiful small town blessed with basic amenities like good roads, electricity, running water and free schools for the downtrodden. Dr. Abraham himself has built a free school for those who can’t afford the cost of his ivy league school. Such a story of impact inspired his ever-thirsty audience who kept asking for more.

More inspiring stories would have been told but the evening was not enough, the night was fast coming and home was calling. In obedience to nature, proceedings had to come to an end with a vote of thanks.

“Thank you for being a Professor and my junior “, said the star guest to Prof. Ushie, treating everyone to another buffet of laughter.

You would think Ushie was the only Professor in the hall that evening but he wasn’t. There was Professor Felicia Etim, a celebrated and accomplished librarian. There was also Professor Charles Obot, a  communication scholar. These two professors contributed immensely in their kind remarks too. A few more remarks had come from other esteemed participants such as the host, Dr Ekong Sampson and the founder, Dr. Udeme Nana before the evening was finally over. Time was just the problem.

By the time the evening was over, everyone agreed that an evening with Dr. Emmanuel Abraham, Founder of Topfaith, can never be enough. May Uyo Book Club have more of such great evenings.

Endiong John is a Biographer and public affairs commentator based in Uyo, Akwa Ibom State.

By UBC DeskJuly 8, 2022Featured PostsComment on When an evening is not enough