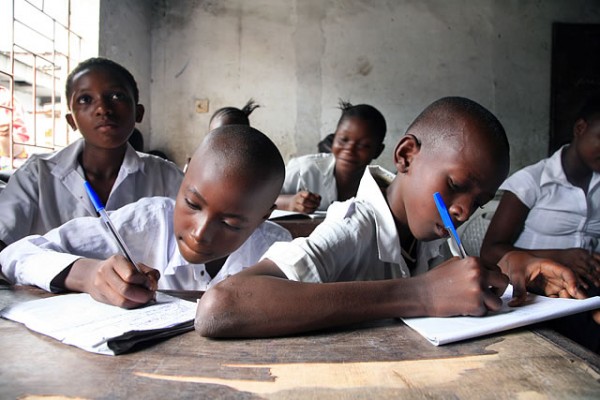 Sad ghosts haunt these empty spaces. Footfalls of yesteryears echo in these places. And the shadows cast in the waning evening lights are all so familiar. Whose face was that glistening on the wet tarmac? Linus’s?
Adorable old Linus, dependable goalkeeper, keeping clean sheets by virtue of his sheer bulk and not by any tactical prowess.
They said that the motorcycle was too fast. Linus, distracted perhaps by thoughts of lunch, did not look. Left, right then left again we were taught.

Some could hear the screeching tires and the screaming people from twelve blocks down.

I remember seeing the mother, pressed in by leaden faces, her blouse wet with tears and snot, in a heartbreaking soliloquy asking the Lord, why not me too, my only child gone?

Whose name is whispered by the soughing wind? To whom do the trembling leaves bow? Is that Joseph I see?
Maybe because he was always first up a tree if we spied a fruit – mango, orange, almond. He was so nimble in the art of climbing. Up and down in blinding speed, price in hand, and as sure-footed as a monkey.

We were, though, all nimble in class, particularly Arithmetic class, taught by a terror whose name to this day evokes dread. MR EKPE. There was a rumor among the boys that he cooked his cane, with pepper and salt as condiments, the better to sting when applied to the backside, through which, hopefully, the lesson would be assimilated, as the head, the normal route for normal boys, proved recalcitrant!

Four to seven strokes were routine, depending on the gravity of the stupidity. An extra flourish, the eighth, was administered to repeat offenders. Joseph had his fair share of eight strokes.

The atonement routine was fairly simple. A stupid answer was immediately followed by Mr Ekpe’s favorite imprecation: ‘ Son of the devil!’  The culprit made the lonely walk up to the front of the class and keeled over the back of a chair while hitching his buttocks up.

Punishment administered, he had to look contrite and solemn, like you do after you have received communion, as he made his way back to his seat.

This was particularly important to Mr Ekpe. Any boy whose demeanor did not show sufficient amends, was guilty of  ‘strong eye’ and was further punished by standing on his seat for the duration of the lesson .

But, like I mentioned, we were nimble and resourceful. However, our nimbleness was not… er… exactly within the bounds of legality.

Olympic exercise books have been around as long as anyone can remember. These blue books usually come limited by the number of open, writing leaves within them – 20,40,80, etc etc. However, for us at the public primary school, this feature was not what endeared them to us. Neither do i remember the blue color being of any special charm. Rather, what made them indispensable was at the back cover : METRIC ARITHMETIC TABLE on top; MULTIPLICATION TABLE at the bottom.

The makers of these blue exercise books were ordained, we believed, by God to offer succour to harassed primary school pupils. Unfortunately, not all printing presses were that benevolent . A callous printer once made some fancy exercise books without the arithmetic table on the back cover . A doting father bought one of these for his son, a classmate whose name i have forgotten. The boy was said to have wailed so forlornly at seeing the book that his alarmed mother, thinking that his senior brother, with whom he shared a plate of soup, had deprived him, as usual , of his piece of beef, beat the senior boy severely despite his protestations of innocence.

The METRIC ARITHMETIC TABLE  dealt with, if i remember correctly, weights, volumes and time. The essence was conversion – of smaller units to bigger units. For instance time in seconds to minutes and hours, or weight in grams to kilograms and distance in meters to kilometers. I do not now remember lessons on conversion, even though I am sure that we must have had them. My memory, rather, involves the multiplication table, and a certain episode i will now relate.

Mr Ekpe was a creature of habit and taught in the style of the period, by rote. At the beginning of each lesson, he announced the topic with solemn purpose.
‘Today is two times table’ for instance. By which he meant multiplication in twos. We anticipated such lessons and were prepared for them.

Our writing desks were roughly hewn and served a dual purpose. There was a desk in front with an open space for storing books and pencils. This space had a cover that opened outwards. It had a lock. Attached to the desk was a tiny bench on which we sat. When we were forced to sleep, for instance, because of noise making and rowdiness, we simply leaned forward from the bench, placed our heads on the desk and day dreamed away.

With some effort , it was possible to insinuate the Olympic exercise book, back up, into the space in the desk, out of sight of Mr Ekpe, who had no clue about what was going on, with both eyes simultaneously on the multiplication table as well as on Mr Ekpe, all of this while sitting ramrod straight.

Mr Ekpe invariably started with the first boy on the front row to his right and worked his way to the last boy on that row, then behind that boy on the row behind, right-wards to the last boy, then behind and so on until the lesson was done.
All you needed to do was count how many boys were ahead of you and mark it discreetly against the multiplication table in the desk.

That morning’s lesson was ‘eight times table.’ This part of the table was made by the devil, as far as we were concerned, because it was particularly difficult. It did not have the clarity of the ‘one times table’ or the charm of the ‘two times table.’ But we were not unduly worried. Help was at hand. Under the desk. For every boy.

‘Eight times one,’ Mr Ekpe began, pointing with his cane at the boy furthest on the front row to his right.

‘Eight!’ the boy, hastily on his feet, answered.
‘Clap for him,’ Mr Ekpe said.
We obliged vigorously .
‘ Eight times two,’ he indicated the next boy.
The boy was ready. We were all ready.
‘ Sixteen!’ he cried triumphantly.
‘Clap for him!’
‘Next!’

I was number eight in line. My answer was before me. God bless olympic exercise books.

I luxuriated in the warm applause, like in a blanket during cold harmattan nights.

Joseph was next. But at that moment, the headmaster, Mr Effiong, entered the class.