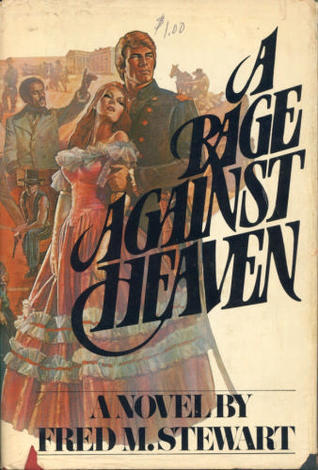 “I’ve raged against heaven in my life,but heaven seems to be curiously deaf in my case.”

The novel, A RAGE AGAINST HEAVEN, by Fred Mustard Stewart, has a “sweeping and relentless narrative and a powerful supporting cast…is moving and entertaining in the grandest tradition of epic historical fiction.” Those words are not mine. There are among the tag lines from the publisher penned in 1978 when the novel was first in print. Those words had a gripping effect on me about thirty years ago when I embarked on an epic adventure of validating the rousing claim with my first reading of the novel about ten years after it was first published. The author, Fred Stewart, a history graduate of Princeton University, New Jersey, USA, proved his worth as a good student of history and a terrific storyteller.

I recall that the novel provided for me the most vivid description of a book that is unputdownable. At a bulging 665 pages, it was scary for me as a secondary school leaver to even carry around. Yet, I dared not interrupt the flow of anxiety and curiosity about how the story will end. I was fixated on reading it. Not missing a line and racing to the very end almost with rage. It was so riveting. It remained my best fiction novel for a long time. I had memorized the line, “I’ve raged against heaven in my life, but heaven seems to be curiously deaf in my case.” It served me well on many occasions, particularly during my undergraduate days. It was part of my arsenal of catchphrases often deployed to grab attention and sway minds with near magical effect. When deployed with practised tact, it was a strategic and potent weapon to disarm a few ‘stubborn babes’ who seemed to be in awe of such a seemingly heavenly and sobering confession. They would say ‘YES!’ to about anything once I dropped that line with appropriate adaptation. I loaned my first copy of the novel to a mentor and never got it back. An old friend who knew my love story with the novel sent me a used copy from America recently. When I peeled through the parcel, an amazing feeling of excitement erupted. My work plan was adjusted, and the novel was once again pushed up to my priority list of things to do.

The author takes on the herculean task of telling a story set in the 19th century (the 1800s), providing “a tumultuous tale of passion and betrayal, love and revenge.” The story spreads over many years and across the two continents of America and Europe. There are vicious wars, devious scheming, espionage and corruption in high places. Though rendered as fiction, much of it is based on facts. The monstrous era of slavery in America, the American Civil War, the Mexican Empire, the French Second Empire, the Franco-Prussian War, the Siege of Paris and the Commune may well belong to the Ages, but the grand history is recast by Stewart in a style surfeit with extreme suspense. His description is loaded with effusive prose and graphic narrative to exact clarity on many intriguing subjects and scenes. He injects a high dose of bawdy literary flavour. There is rape, murder, plotting and counterplotting, with revenge as a constant motive, all masterfully strung, weaved and packaged to make for a top-rated thriller.

Louis “Lew” Crandall is the star character in the novel. He is handsome, blond, and rich, with an authentic aristocratic background from both sides of his parentage. His family roots originate from two continents – America and Europe. Lew was a princely ladies’ man with an overly lustful appetite. He got miserably weak in making sound judgments and drawing firm ethical boundaries when his genitalia warmed up. And there were not a few such delicate moments. He was sought after by many in Philadelphia about the mid-1800. The author casts a long list of classy characters to revolve around Lew. There is prominent mention of events around the time Abraham Lincoln held office as the 16th President of the United States (1861-1865). Lew Crandall jettisoned a career in medicine to enlist in the elite army corp as a commissioned lieutenant. He was among the first troops to answer Lincoln’s call for men to protect the capital from the rebels in the neighbouring states of Virginia and Maryland that encircled Washington. This was the American Civil War. Within a short time, Lew had earned himself a few (non-military) epaulets – a patriot, traitor, and suitor, depending on who was decorating him. He was hardly on the battlefield as a soldier. He still fought many battles in his life. He had the horrible experience of being presumed dead by many and passing through the valley of death in many encounters. No one would argue that he sure was a man with nine lives.

Lew Crandall was four months into his marriage to Elizabeth Butterfield when he accepted to serve in the army. Before kissing his young wife goodbye and set out to answer the national call to arms, there was a medical confirmation that he had deposited the seed for the next generation of the Crandall that was growing in his wife’s tummy. Elizabeth was enthralled by the news of carrying a future Crandall. She was sour at the prospect of a war casualty that could befall the father of her baby. It turned out to be their last kiss as a married couple for ten harrowing years.

There is the enthralling story of George, the slave who was taught how to read and write. It was illegal for slave owners to do so. But George was favoured by Julie, the daughter of his Caucasian owner, who genuinely loved George and abhorred the ill-treatment of slaves. She was overt with her feelings and attitude. For that reason, she was considered a deviant. Her expressive kindheartedness towards the black slaves was seen as sacrilege, and the lady was branded as insane by her relatives and other slave owners. The important skills of reading and writing became the passport to George’s freedom through a daring escape to the Northern side of America where some level of conscionable tolerance for slaves was emerging. His rare literate level for a black slave facilitated his rising profile and eventual stardom as a public speaker, newspaper publisher and pro-campaigner for the abolition of slavery in America.

Lew and George transformed independently to adopt the new identities of Peter Fraser and Gilbert Samson, respectively. They would join forces in an odd partnership to revenge the many atrocities of a common enemy: the powerful former army general and Senator Ralph Matoon. He was a devious dealmaker and a dodgy lawbreaker. Fraser and Gilbert aimed to expose the corrupt and murderous acts of Matoon by deploying the power of the pen. Or, more accurately, the power of the press. The vengeful mission sparked a trail of threats, sleaze, kidnapping, flying bullets, deaths, and maniac depression.
In the end, Lew Crandall, in a sobering reflection of his tumultuous life – his gallantry and particularly villainy – seemed puzzled by the deafening heavenly silence in his case in spite of his self-confessed “rage against heaven.”

P.S.
Let me dream. If I were privileged to be an active member of the noble profession of teaching, I would make reading, A RAGE AGAINST HEAVEN, a mandatory elective for budding writers (with a parental advisory to minors) under my care and mentorship. Reading the novel, again, in the 42nd year after its first publication in 1978, I can attest to its potency as an authentic thriller and an all-season best seller. Some have dared to rate it along with the classic and award-winning novel, GONE WITH THE WIND, published in 1936 by Margaret Mitchell (1901-1949), an American writer and journalist. Is it deserving of such a high rating? It is worth finding out for yourself.

By UBC DeskSeptember 1, 2022Book ReviewsComment on A Rage Against Heaven: A Review by Anie Sunny Udoh